X's are both hugs and kisses, O's Where stars that died gave out, gave up, gave in -- Where no one meant the promises they made. Oh, and one more thing. I send my love However long and far it takes -- through light, Through time, through all the faithlessness of men...

I was drawn to this passage because it conjures thoughts of the scale of the universe, the power of light and time; and it speaks of the importance of a message and the persistence needed to see it through.

An Alidade is an instrument that both ancient and modern astronomers use(d) to sight distant objects to determine locations and reference points. My intention is for the form of the sculpture to resemble an astronomer’s tool while implying a shift in scale through a sort of forced perspective. The proposed sculpture is composed of recognizable elements such as architectural structures and backyard fences combined with abstract references to the Iowa landscape and planetary orbits. The ‘telescopic’ element on top will be open at each end so that viewers can look through it at a designated section of sky; during the day, it will capture sunlight; at night, stars will pass by it demonstrating the passage of time. The picket fence element serves as a reference point for home. 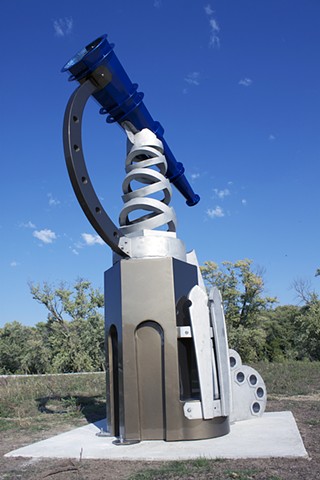